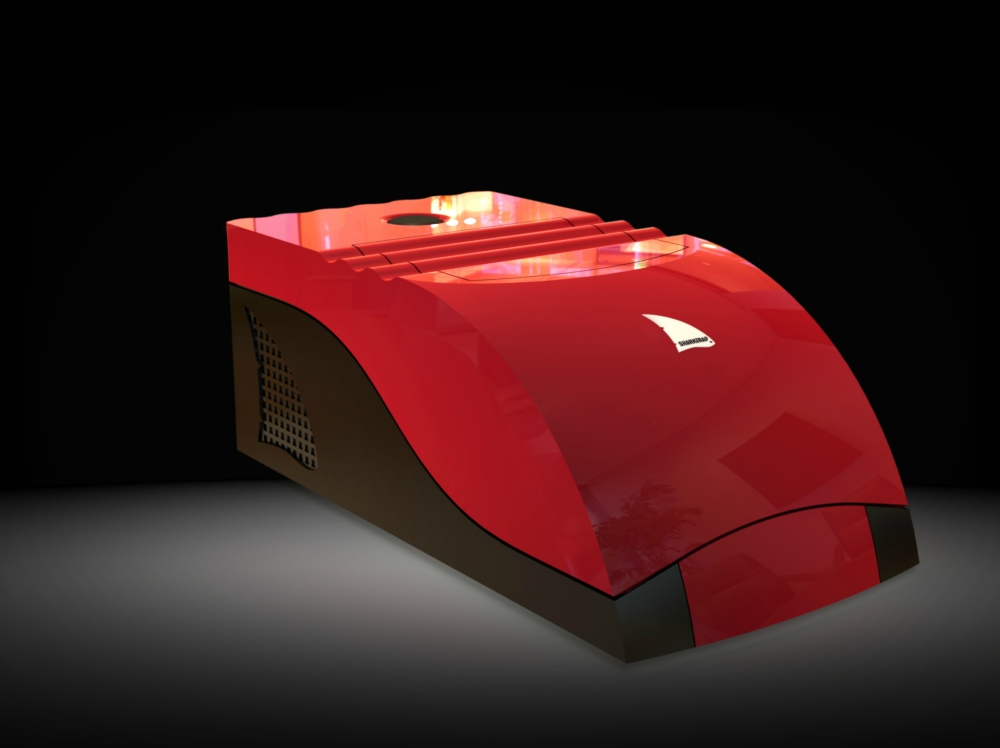 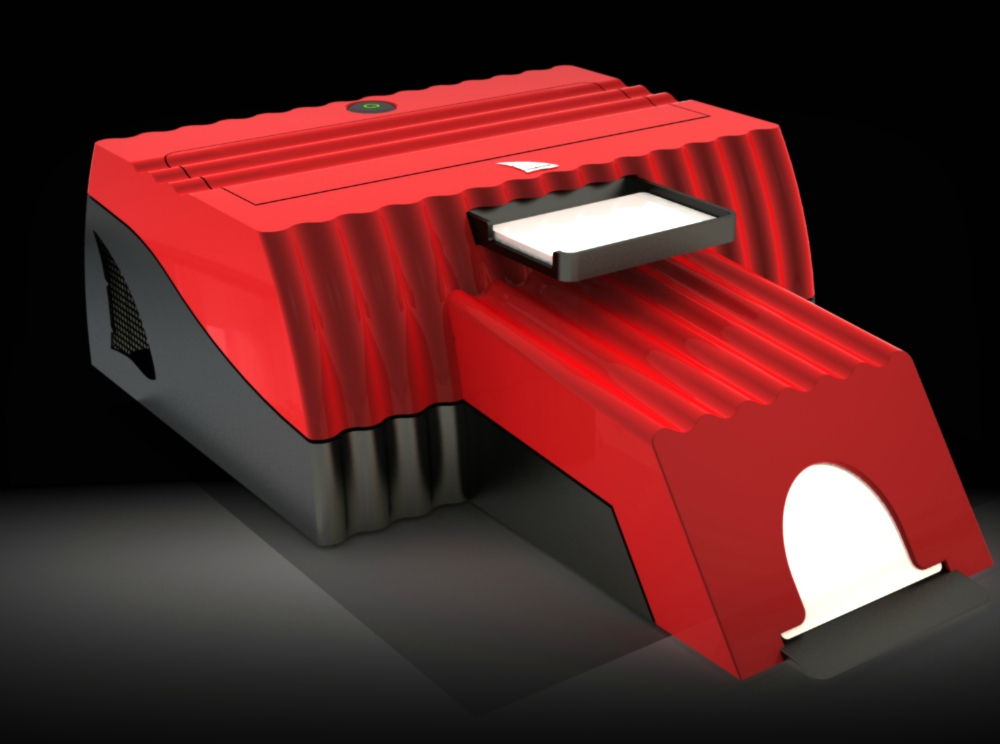 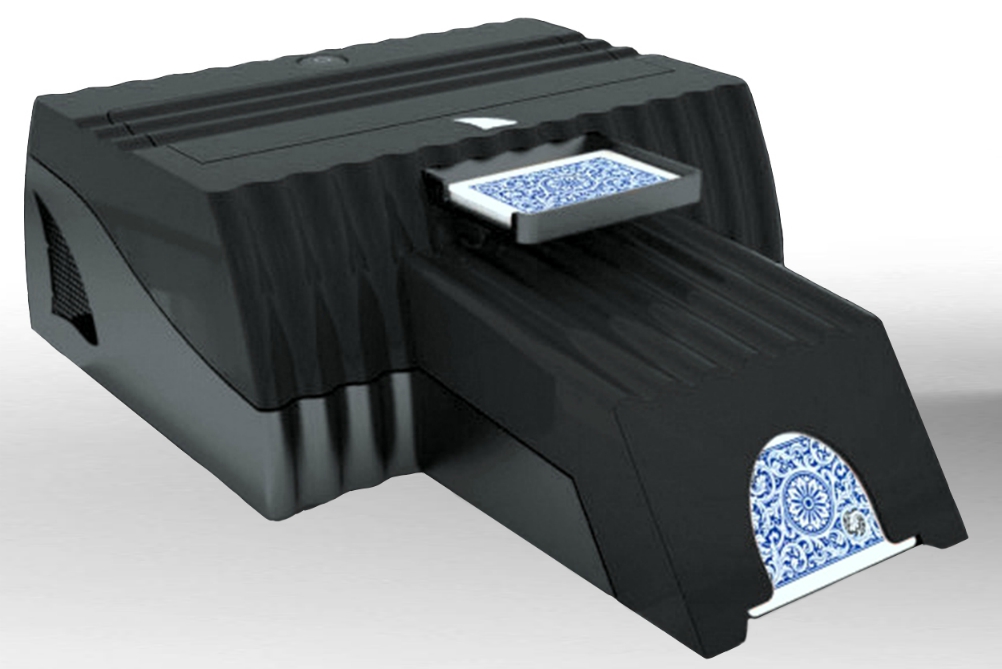 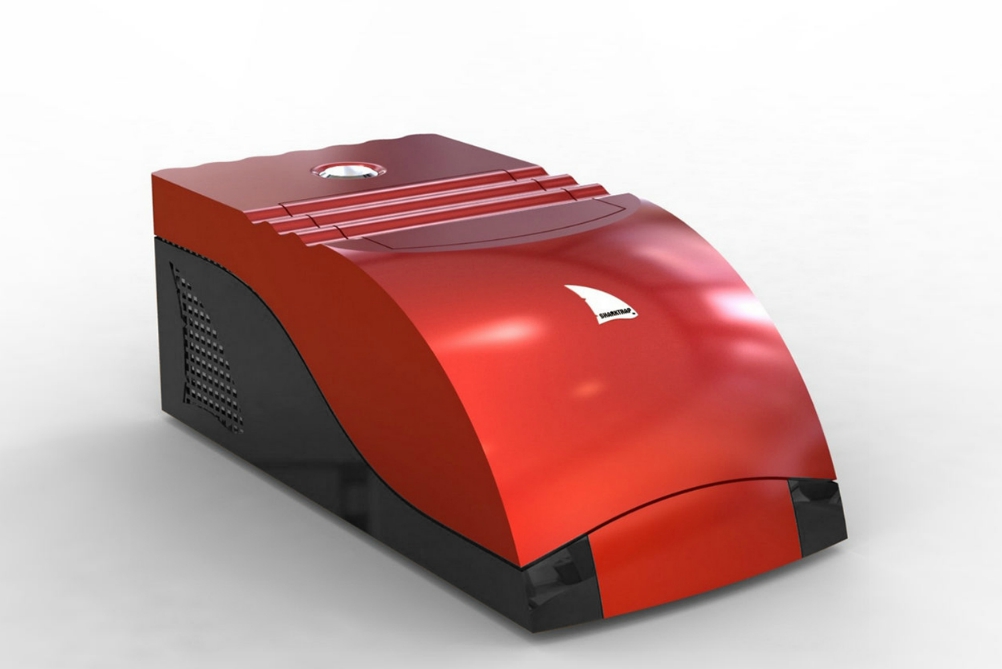 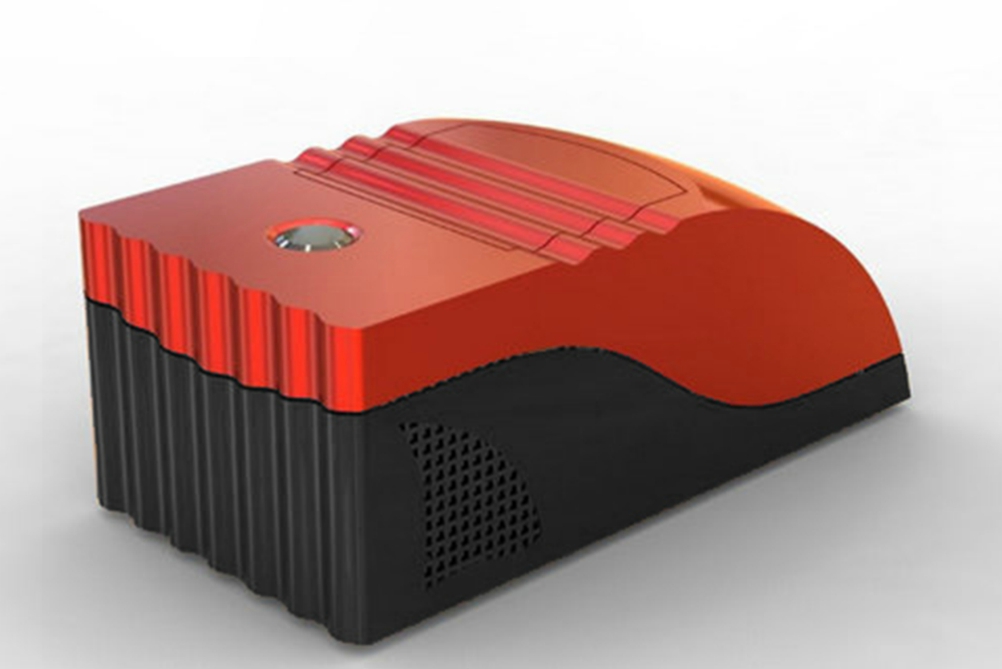 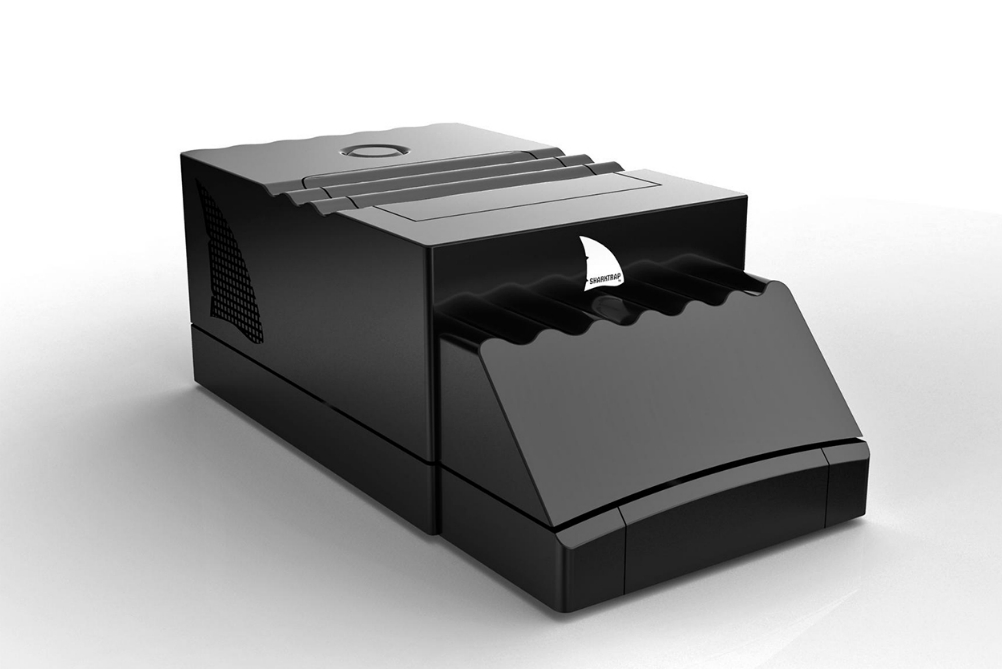 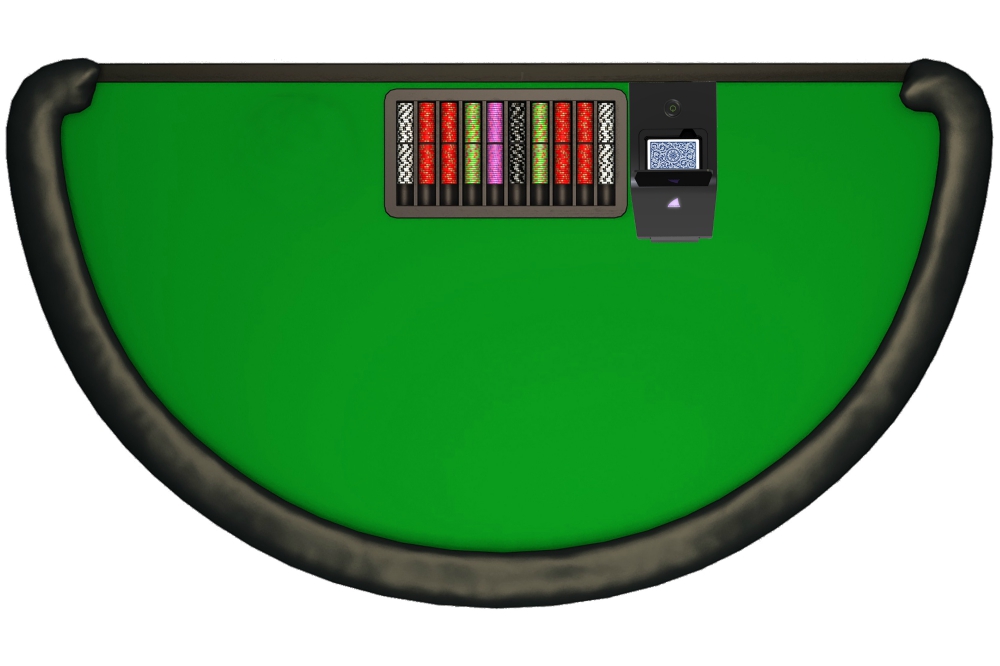 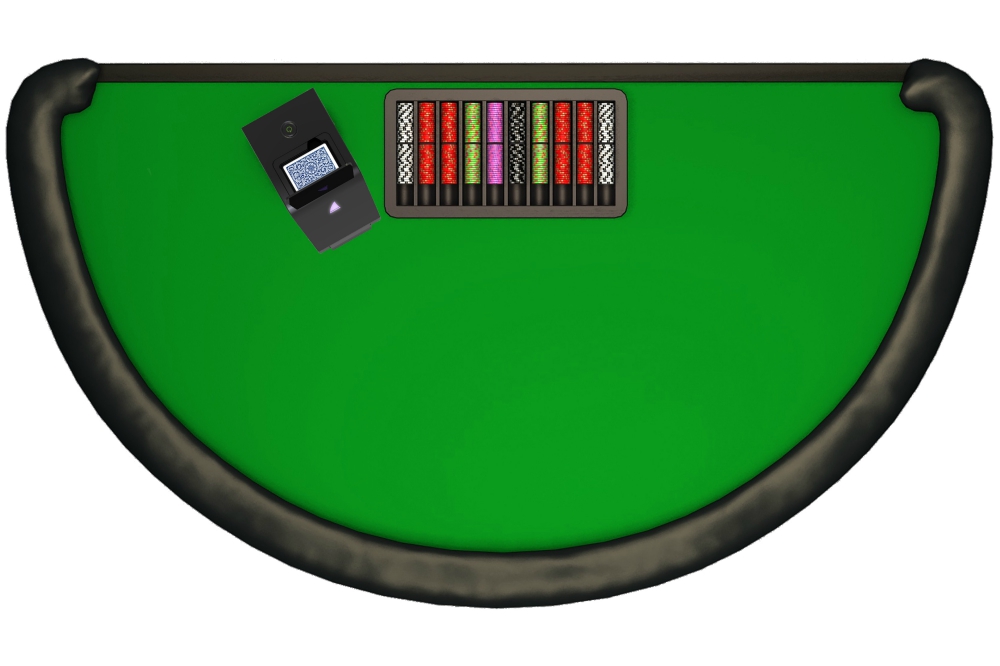 Shark Trap™ Gaming & Security Systems (ST) started with the premise that technology had advanced to the point where it should be possible to develop a system for detecting all forms of marked cards, and that such a system could be offered to the casino industry in an automated, unintrusive, reliable, cost-effective platform that would transcend table-game security.

To house the necessary card-marking-detection technology, it was immediately apparent that shuffling machines were best suited for the job. After talking with several operators to get their feedback about the pros and cons of today’s shufflers, their invaluable input became the starting point for developing a complete line of random-selection shufflers, each with one or more attributes specifically designed to address various wide-spread concerns.

Finally, it was determined that shufflers working together and sharing data was the ultimate way to ensure accurate results. The idea of a server-based system of networked shufflers was advanced, and after many months of research, several technical conclusions began to evolve in the following areas:

"After three years of extensive research and development, and after only a few months of sharing the Shark Trap project with industry insiders, the response has been overwhelming, so I wanted to pass along my sincere gratitude to the rapidly growing list of casinos and cardrooms that have offered to field-test and place shufflers, and who have expressed a can’t-wait enthusiasm for the Shark Trap system.

The good news is that we've recently finalized everything (design, manufacturing, etc.) needed to move forward on all fronts. The expectation is to be filling shuffler orders as soon as mid-2018 while continuing to advance our proprietary Shark Trap technology in ways that will unquestionably change the way the industry operates and protects table games.

Shark Trap Gaming & Security Systems announced they will showcase the new Super Shuffler in booth 1770 with distributor Aces Up Gaming while at the National Indian Gaming Associations' Trade Show.

The show takes place April 19 - 22 at the Anaheim Convention Center, in Anaheim, California.

Shark Trap would like to announce that the company’s Super Shuffler has received the GLI approval for GLI-29 jurisdictions and the State of Nevada.

According to Dino DeGregorio, this now allows us to move into specific markets such as California Tribes, California Card Rooms, Nevada, Colorado, and various other jurisdictions. We will be engaged in installing in gaming corporations that have casinos in multiple states. The installs will proceed immediately as our potential customers have long waited for these important approvals.

Shark Trap will be demonstrating our new smart shuffler at G2E in Las Vegas, October 4 through 7. During the show we will be taking orders for delivery in December. Shark Trap will be in booth #3914 with Aces Up Gaming.

Stop by our booth at the show to see the Shark Trap Super Shuffler in action or visit us at www.SharkTrap.com.

Shark Trap is a GLI approved, revolutionary, high-tech shuffling machine, offering a table-game platform that will increase productivity, reduce card costs, and attain never-before-realized levels of game protection.
The Shark Trap Super Shuffler comes ready to work right out of the box and requires no table modifications. With our technology, all that is needed to start a game is to remove machine from its box and plug in power.

Shark Trap Gaming & Security Systems is proud to announce that it will be in Booth 534 at NIGA Tradeshow from July 19-23.

We will showcase the shuffler which is a combination of 3 shufflers in one novelty game/single and double deck all in one unit. The units are tabletop and ergonomically suited for dealers.

We will be in the Aces Up Gaming booth who is our distributor in North America.
Continue Reading

This certification is a major milestone for the company as it allows the continued pursuit of bringing its revolutionary shuffler to market.

In addition to the upcoming field trials, the company has finalized agreements with its supply chain partners, paving the way for the company to begin taking orders upon completion of the field trials.

The sharks will be in the wild soon!

If you are interested in learning more about getting Shark Trap Shufflers in your casino, please email your questions to info@sharktrap.com.

GLI’s primary objective will be to evaluate the ST shuffler for randomness.  We’re confident that the shufflers will pass GLI’s entire suite of tests because the ST shufflers are the first casino shufflers to incorporate 'true random number technology' (TRNG) instead of the industry standard, 'pseudo random number technology' (PRNG).  The advantage of a TRNG is that each seed for each random number is generated by physical phenomenon (hardware), resulting in true randomness.  The seeds for PRNGs are arithmetic-generated via software and are therefore deterministic.

We will announce the results as soon as GLI completes the certification process.

We are also busy completing the early design work for Shark Trap’s Round-to-Round Multi-deck Shuffler and its ground-breaking Baccarat and Punto Banco Security Platform, which offers unequaled game protection while eliminating the need for preshuffled cards!

More announcements are forthcoming as we continue our quest to offer Shark Trap’s line of “super shufflers” to an eagerly-awaiting industry.

Thanks for your patience . . . in terms of productivity, card costs, game protection, and innovation, I promise the wait will be worth it!

Making Progress and Picking Up Speed

Las Vegas - January 14, 2019 - Shark Trap is on the verge of several major breakthroughs that will be announced in 2019. With shufflers just weeks away from submitting to GLI for certification and patents filed for our revolutionary Baccarat and Punto Banco Security System—eliminates the need for preshuffled cards!—Shark Trap has finally forged ahead after an unfortunate delay due to a change in engineering firms.

Today, Shark Trap takes another giant step forward. We are proud to announce that we have entered into an agreement with Aces Up Gaming for the exclusive right to distribute Shark Trap’s complete line of super shufflers in the United States.

After several meetings with the principles of Aces Up Gaming, headed by their president, Charlie Drennan, we found them to be the perfect match for our shufflers and most importantly, our vision.

Aces Up Gaming brings several notable attributes and assets to the table. In addition to the obvious—licenses in virtually all US jurisdictions—they have a fierce, competitive mindset and desire to offer only the very best gaming products to the industry, an innate understanding of the industry, and an impressive suite of new games and progressive system that will compliment our shufflers.

Aces Up Gaming’s product development manager, Todd Taylor, had this to say about the partnership:

“I believe this is the most revolutionary gaming product in the last twenty years. To say it is a game-changer would be an understatement. It has the ability and capacity to be on every gaming floor in the world.”

A partnership with Aces Up Gaming is a pivotal step for Shark Trap and we are excited about joining forces and capitalizing on the synergy between our companies.

We expect the next important announcement to be GLI approval, which we anticipate to be a straightforward process, given that we’re employing the most sophisticated RNG technology ever implemented into casino shuffling machines.

Until next time, please be patient . . . Shark Trap is almost to the finish line.

Shark Trap Gaming & Security Systems, LLC, continues to make steady progress in their quest to introduce the world’s first ‘super shufflers.’ Shark Trap shufflers are ‘smart shufflers’ that offer many advantages over traditional shufflers including no-batch platforms (only one deck required for one-deck novelty games, not two decks; only six/eight decks required for baccarat, not twelve/sixteen decks), reduction in card costs, faster and more productive games, and the capability to detect all forms of marked cards and asymmetries.

Shark Trap is making three major announcements in advance of the 2018 G2E.

First, Shark Trap has begun the GLI approval process and anticipates certification on or about January 2019. Moreover, customers are waiting to field test the units.

Second, Shark Trap is on the verge of announcing an exclusive distribution/licensing partnership that will facilitate the placements of shufflers both in the USA and abroad.

Third, Shark Trap is releasing some of the details about its ground-breaking ‘GC-Bacc System’ for baccarat, which features their one-of-a-kind round-to-round shuffle (patent to be issued in early October, 2018).

Here are just a few of the features:

• The system will be the first to increase game speed and productivity with a new
delivery system that allows each card to be dealt from a flat, forward position, which
dramatically reduces dealing distance and therefore dealing movement for every card.

• The system provides operators with more options to reduce card costs than ever before,
especially in ‘squeeze games’ where the cards are discarded after every shoe.

• Unlike any other platform in the world today, the system offers absolute protection
against marked cards and asymmetries, and we can prove it!

• The system also offers absolute protection against the most dangerous, sophisticated,
and successful baccarat scams known to exist, and many more yet to be exposed.
Examples include peek scams, cutter scams, high-tech scams, and many more.

Shark Trap employs the same operational technology in all of its shufflers, so following GLI
approval, the expectation is that the development process will begin to pick up speed. We also expect more industry-changing announcements in the very near future.

Staying true to its patent portfolio and trademark status, Shark Trap Gaming & Security Systems received additional tademarks to verify types of shufflers that will be introduced.

Catch'em in the Act™