After the claw scooped up a plastic ball with a cash prize inside, a few tense moments started for California resident Dottie Dudley at Circa Las Vegas. 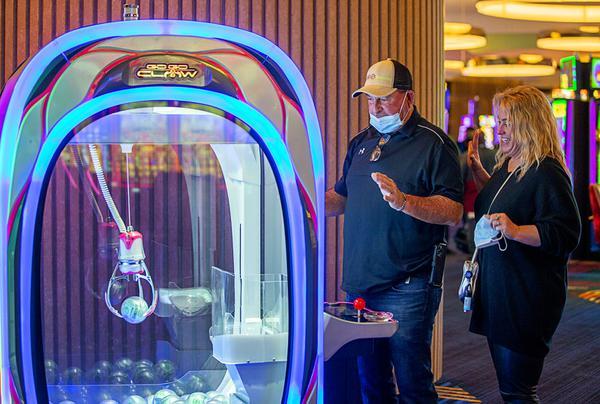 Dudley, playing the game with her husband, Rich, could barely contain her excitement as the clenched claw moved — in a herky-jerky manner — toward a basket.

If the ball reached the basket, Dudley would win the prize, which could be anything from a few bucks to several thousand dollars.

“It’s like life or death for those couple of seconds when you’re waiting to see if the claw drops it,” Dudley said. “It’s fun. It reminds you of what we used to play as kids at the pizzeria.”

Made by Las Vegas-based Aruze Gaming, the Go Go Claw machines are at a handful of local casinos, including the Cosmopolitan, MGM Grand, and The D Las Vegas, where the game made its Vegas debut last summer. Circa has four of the games.

“It’s been popular; we have these games in some pretty high-traffic areas,” said Rahmi Chaghouri, Circa’s director of operations. “People walking by who see this, they see people having a good time and they often want to give it a try. Aruze has been a great partner for us.”

The company also has some games at casinos in Southern California and plans to get up to 100 more machines on casino floors across the country before the end of the year, Ziems said.

“It was a totally new concept, so we didn’t do a big media blitz when it came out, but we’ve been really excited by the response,” Ziems said.

The game is similar to claw games found at arcades and restaurants, especially in the 1980s and 1990s. With those games, which can still be found at some businesses, the prize is often a small toy or a stuffed animal.

Though Go Go Claw has the appearance of a skill-based game, it’s actually 100% chance, Ziems said.

“There’s been a good mix of older and younger people who play the game,” Chaghouri said. “About half the people who play this are around age 40. We get people from that generation playing, probably because of that nostalgic aspect of it. It can bring back memories. No matter what age you are, people seem to like it.”

As the Dudleys continued to play the game — taking turns activating the claw — they eventually won $25. As they played, several people stopped to watch.

“It’s kind of a group game,” Chagouri said. “It’s good to play with a group where people take turns. It can get competitive.”

This article was written by Bryan Horwath and appeared in the Las Vegas Sun.