When the Caesars Entertainment takeover of the William Hill sportsbook became official last year, Joe Asher knew it was time for the next chapter in his professional life.

A Delaware native who is a regular at Vegas Golden Knights games and has a keen interest in the Nevada sports betting scene, Asher spent some time with the Las Vegas Sun to talk about his new role and the expanding sports wagering industry in the U.S. 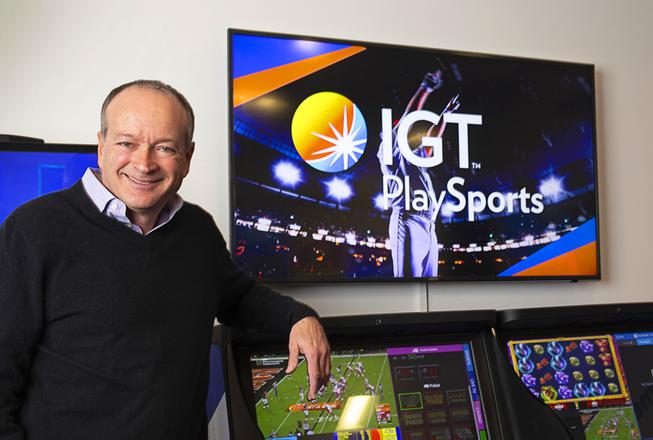 Tell us about your job at IGT. What are you doing?

I oversee the sports betting business, which is hardware and software to run sportsbooks. On the hardware side, it’s the kiosks and terminals and the display boards. Then, there’s the software to actually run the book. Business has grown pretty substantially since PASPA (the Professional and Amateur Sports Protection Act that restricted nationwide sports betting) was overturned and there’s a lot going on.

How is it different from what you were doing at William Hill?

The magnitude of the decisions on a Sunday during football season are much smaller for me now, but I’m still pretty close to it, which I enjoy. I still talk through what the right number should for the line on, for instance, the Green Bay game.

We obviously want to help our partners get those numbers right. I enjoy that very much, but it’s different in my role now.

Legal sports betting seems to be gaining in popularity — and availability — by the minute. Largely driven by the NFL, over $2 billion in sports wagers were made in Nevada alone during the last two months of 2021. Where do you see the future of the industry?

Look, the National Football League is a juggernaut and it just keeps getting more popular. They do a great job promoting their product. We’re all watching the NFL, and that’s translating into betting.

You see the betting numbers lately, and it’s unprecedented. You see that in the numbers being released by the various states and it what the operators say.

As new markets develop, sports betting will continue to grow. The latest thing is the opening up of mobile (betting) in New York. We’re up to 20 or 22 states and there will be more states to come.

As for Nevada, I’ve always said that sports betting in other states wouldn’t hurt Nevada but would actually help, if anything. I think that myth has been put to bed. I think we’re seeing that with what’s going on.

The new sports betting customers, who are they? Are they mostly younger people in that coveted 18 to 40 age range?

The way I look at it, the introduction of sports betting in all these new states, and the advertising around it and embracing of it by leagues and media companies, is obviously bringing new fans and customers. That’s only going to continue.

Look at Caesars Entertainment, they’re using sports betting to attract all these new customers who are going to visit their properties.

Sports betting is probably the single greatest customer acquisition tool in the history of the U.S. casino business. People may sign up for a mobile sports account, but then they’re going to get offers to visit a casino and eat in restaurants and stay in hotels and go to shows.

The sports scene is exploding right now in Las Vegas. With the Raiders here and the Golden Knights and their success these past few years, people are also talking about possible Major League Soccer and Major League Baseball franchises coming to Southern Nevada. Can Las Vegas support all of these teams?

The major league teams, yes, for sure. When the Eagles played the Raiders last year (at Allegiant Stadium), I think half of Philadelphia was here for that game.

I was down on the Strip that weekend and it was something else. The impact of Allegiant Stadium has been significant, and we all know what the Golden Knights have been able to do.

Then, yes, we’re all waiting to see what the (Oakland) A’s do and if they might come to Las Vegas. Obviously, all of that is great for business if you’re in the sports betting business, but it’s also had a great impact on broader Las Vegas. It goes far beyond sports betting.

This article was written by Bryan Horwath and appeared in the Las Vegas Sun.