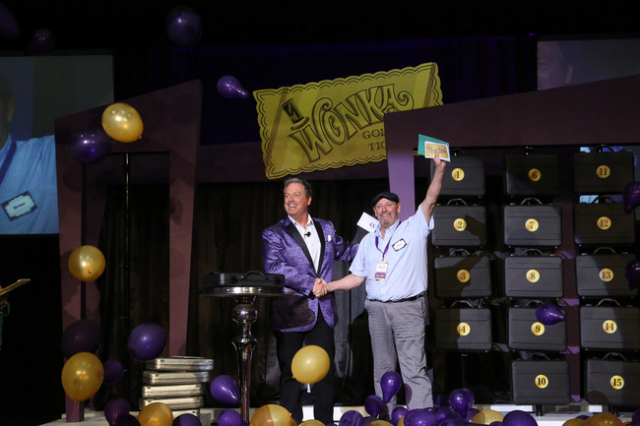 Twenty-three WILLY WONKA GOLDEN TICKETgames were launched in 18 states. A record 104 million tickets were manufactured, representing a total of $1.09 billion in potential retail sales for the participating lotteries.

Kyle Rogers, Executive Vice President Lottery Licensing for Scientific Games, said, "Over the last 12 years, our creative teams have worked hard to perfect the many details in our linked play experience, from the play style of the instant game to the online second-chance opportunity, and the entire experience at the winners' event. These events have become a unique once-in-a-lifetime experience for lottery players that are second to none."

Scientific Games created WILLY WONKA GOLDEN TICKET offering players the chance to win prizes instantly, plus a bonus second-chance game played online to win trips to Las Vegas and take part in the BILLION DOLLAR CHALLENGEfor the opportunity to win cash prizes from $1,000 up to $1 billion. Since launching in 2017, a total of more than 200 second-chance winners have headed to the BILLION DOLLAR CHALLENGE event held in April 2018 and April 2019.

Amid a frenzy of excitement at a colorful, WILLY WONKA & THE CHOCOLATE FACTORY inspired venue, players at the 2019 BILLION DOLLAR CHALLENGE event won more than  $2.4 million in addition to the trip to Las Vegas for two including air travel, hotel, ground transportation and spending money. Five players from Georgia, Indiana, Michigan, Ohio and West Virginia advanced as finalists at the event, with the player from Ohio advancing as the grand prize finalist with the opportunity to win up to $1 billion.

The Company's next linked instant game creation is the return of DEAL OR NO DEAL in May 2019. The game features a second-chance opportunity to win a five-day/four-night trip for four to Orlando, Florida and attend a $1 MILLION DEAL OR NO DEAL EXPERIENCE winners' event to play a non-broadcast lottery winner's only DEAL OR NO DEAL game for a chance to win up to $1 million.

Scientific Games launched the world's first secure instant game in 1974 and today is the largest creator, manufacturer and manager of instant games in the lottery industry. The Company provides games, technology and services to more than 150 lotteries around the globe, including nearly every North American lottery.

The information contained on, or that may be accessed through, our website is not incorporated by reference into, and is not a part of, this document.

About Warner Bros. Consumer ProductsWarner Bros. Consumer Products (WBCP), a Warner Bros. Entertainment Company, extends the Studio's powerful portfolio of entertainment brands and franchises into the lives of fans around the world.  WBCP partners with best-in-class licensees globally on an award-winning range of toys, fashion, home décor, and publishing inspired by franchises and properties such as DC, Wizarding World, Looney Tunes and Hanna-Barbera. The division's successful global themed entertainment business includes groundbreaking experiences such as The Wizarding World of Harry Potter and Warner Bros. World Abu Dhabi. With innovative global licensing and merchandising programs, retail initiatives, promotional partnerships and themed experiences, WBCP is one of the leading licensing and retail merchandising organizations in the world.